The Church of Saint Spyridon in Corfu

The Church of Saint Spyridon in Corfu

The church of Saint Spyridon was initially built in the Sarocco square at Corfu Town. However, in 1590 it was erected in its present location. The architecture of the church is a typical paradigm of the Venetian architecture that dominates all over the Old Town of Corfu.

Its bell tower is the highest spot of the town and it is the first thing noticed as the ferry approaches the island. The locals have deep faith in Saint Spyridon, who is considered to be the keeper of Corfu.

According to local legends, he has saved the island four times from the Ottoman invasion, one of the reasons that this church is the most important religious monument of Corfu. Spyridon, or else Spyros, is very common name on the island and the locals actually refer to their saint protector when they want to swear on their word of honor about something.

Inside the church located just behind Liston, the remains of the saint are resting. According to local customs, his remains are carried around the town of Corfu in a very peaceful litany four times a year to celebrate his miracles (Palm Sunday, Good Friday, August 11th, first Sunday of November).

The litanies are accompanied by the local bands and they remain an everlasting tradition of Corfu. 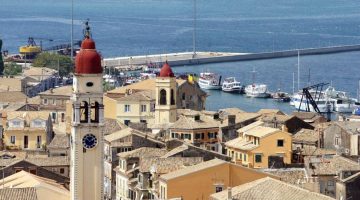 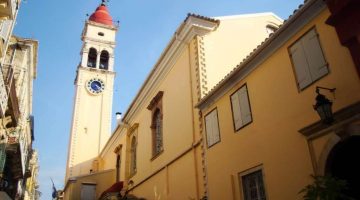 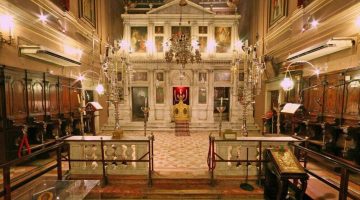